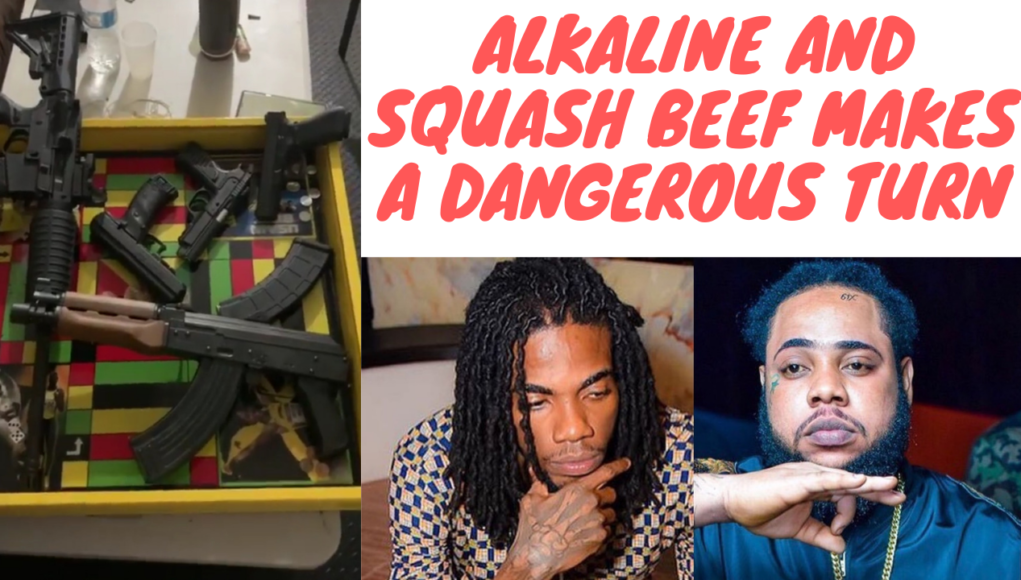 The clash between Alkaline and Squash from the 6ix crew has taken a turn for the worse.

One of his fans decided it would be a good idea to upload a video showing off high powered weapons.

The individual went on to threaten Squash and tell him what will happen when they see him in person.

The weapons include three handguns, one short barrel AK-47 assault rifle and one M4/M16 carbine(can’t see all the details to make out which one exactly it is).

To make things worse, Alkaline posted the video on his Instagram story and it has now gained traction.

This is an incredibly irresponsible move from Alkaline. He is a talented youth but he is heading down a dangerous road.

First of all, we have seen this before with Mavado and Vybz Kartel.

We know how fans can take up their artist’s conflicts and fight them out in the streets. History is repeating itself.

The person in the video sounds like they are from St James as well but there is no way to confirm this.

I want the fans of these artists to know that when they get caught or killed with these weapons, neither Alkaline nor Squash will be paying your bail money.

It will be your poor mother/father who can hardly barely afford the basics.

If you want to be an idiot and kill each other over a bunch of rich artists who at the end of the day is going home to their nice, safe community be my guest.

Just make sure you stay away from innocent citizens with the foolishness.

Eek A Mouse Is Having A Mental Breakdown Or Desperate For Attention?

Politricks Watch was started to highlight and expose a lot of the lies we are fed as a society. News and Politics are our bread and butter but we also speak about various parts of the culture such as Music, Sports, etc.
Contact us: politrickswatch@gmail.com